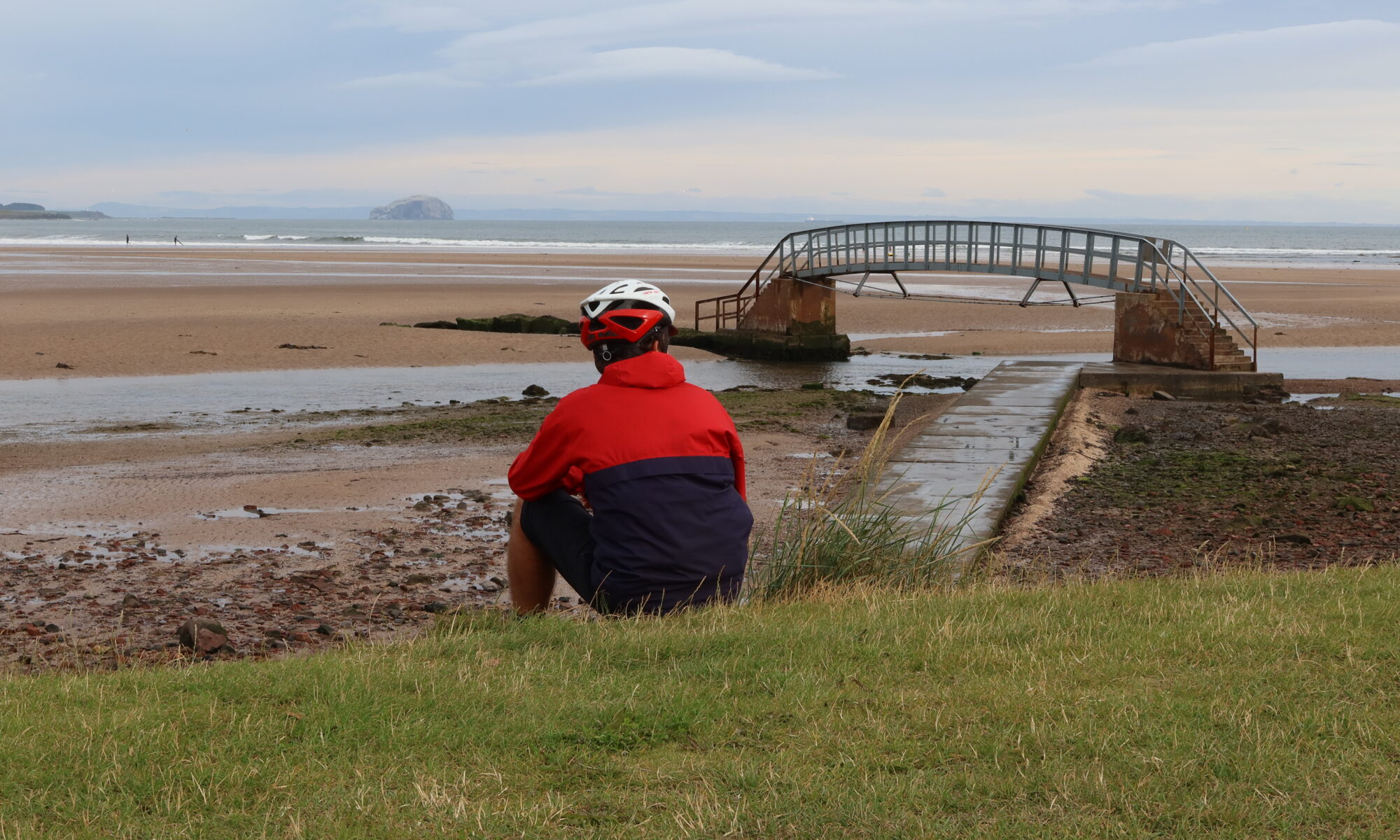 The final and mostly flat section of the John Muir Way travels along the impressive East Lothian coast, with the opportunity to watch plenty of wildlife playing in the waves on wild beaches.

Edinburgh offers fantastic opportunities on and off the bike, with a mountain bike heaven in the Pentland Hills south of the Capital and other bikepacking routes starting and finishing here, like the Capital Trail and Central Belter. From the terminus of the Union Canal at Fountainbridge the route crosses the Meadows on a cyclepath. This section offers great places to stop and rest, with views onto Edinburgh Castle. The route then passes Arthur’s Seat and the distinctively shaped Salisbury Crags through Holyrood Park. From here a cycle path follows the route of the Innocent Railway to Brunstane, with only a short detour to the Edinburgh’s seaside community in Portobello. A short push over the railway bridge can be avoided, but won’t present a problem for most riders. Care is needed on Brunstane Path, as this is popular with other cyclists and dog walkers, and the route continues on a short section on a main road before reaching Fisherrow Harbour in Musselburgh.

The section from Musselburgh to the finish in Dunbar presents a wealth of opportunities to watch the wading wildlife of the East Lothian coast, with birds flocking on its sandy beaches and shores to pick up worms, shells or crustaceans amongst the tides. In winter Redshanks, Dunlin and the large black-and-white Eider Ducks can be spotted. The route from here to North Berwick is mainly flat, but can be exposed to fierce winds. The John Muir Way follows the shore, before diverting briefly to give you the opportunity to visit Prestongrange Museum. For centuries Prestongrange was a place of intense industrial activity. A harbour, glass works, pottery, colliery and brickworks have all left their marks on the landscape, and Prestonpans is renowned for its murals.

At low tide the path along the coast is a great experience, but care is needed at the wet and mossy sections. The route passes a large John Muir mural at the Goth pub, and then continues along the shore towards the site of a former power station. At high tide the road is the best alternative through Prestonpans, rejoining the route shortly after the supermarket at the end of the village. The John Muir Way follows through Port Seton, before the route joins the main road past Longniddry and Longniddry Bents. For wider tires the small coastal path is a good alternative. However, this section is lined by Hawthorn bushes, whose thorns can cause frequent punctures. The road gets busy on weekends and when large events are held, so care is needed. Unfortunately Gosford Policies does not allow any cycling on their grounds, but the house and gardens are worth a detour. Just as the road leaves the shore, a small track on the left leads through stunning forest, with massive concrete barriers lining the route. Built in the early 1940s during World War II, these anti-tank blocks were used for the defence of the United Kingdom against a possible enemy invasion. Aberlady has a hotel with restaurant, a well-stocked shop, pub and another restaurant, and, as every town and village along Scotland’s Golf Coast, plenty of opportunities to play golf.

Aberlady Bay hosts a wealth of wildlife, and the route continues on a great gravel trail past another golf course to Gullane, with more opportunities to eat and shop. Dirleton hosts an old castle and an impressive church, with Archerfield Garden just a short detour on the route there. The route follows a gravel track through fields to Yellowcraig Beach, and continues along sandy singletrails and quiet roads into North Berwick, almost passing the railway station (with hourly trains to Edinburgh).

The Scottish Seabird Centre in North Berwick, about 50m off the route, is also the start of the Go East Lothian Trail, and offers tours to Bass Rock in summer. The steep-sided volcanic rock, visible from far afield, is home to a large colony of gannets. Puffins can also be spotted on the tours. The route passes through the bustling seaside town and past North Berwick Law, a former volcano that offers great views from the top. With a bit of luck the resident Exmoor ponies can be spotted on the way to the top (walking is the much better option here). At the end of the parking lot at North Berwick Law a gap through a wall provides access, but is difficult to negotiate with a bike. Taking the Haddington Road for a short section and then re-joining the route by taking the first minor road on the left is recommended here. The next section of trail through Craigmoor Wood is one of the highlights of the route, before it descends on a mixture of paths into East Linton.

In East Linton the John Muir Way passes Preston Mill and continues along the river, then follows the road for a short while, where care is needed. Passing another set of tank barriers the route reaches John Muir Country Park. This is the part of Scotland where the young John Muir played in fields and rock pools along the coast, and the last section of the route offers great views onto the Firth of Forth. Largely following a walking trail after Belhaven Bay good riding skills are needed, but the route diverts from the original walking route in Dunbar to avoid a number of steep sets of steps. The route follows Bayswell Road and finishes at John Muir’s Birthplace in the centre of town, now a museum. Dunbar offers a range of accommodation, large supermarkets, shops and campgrounds/holiday parks. The train station in town is mainly served by the main railway line on the east coast from London Kings Cross to Edinburgh. Advance reservations for bikes are needed when taking a bike on the train. Alternatively the Go East Lothian Trail offers a route back along the coast to North Berwick, from where frequent trains depart to Edinburgh, and bike reservations are not mandatory.