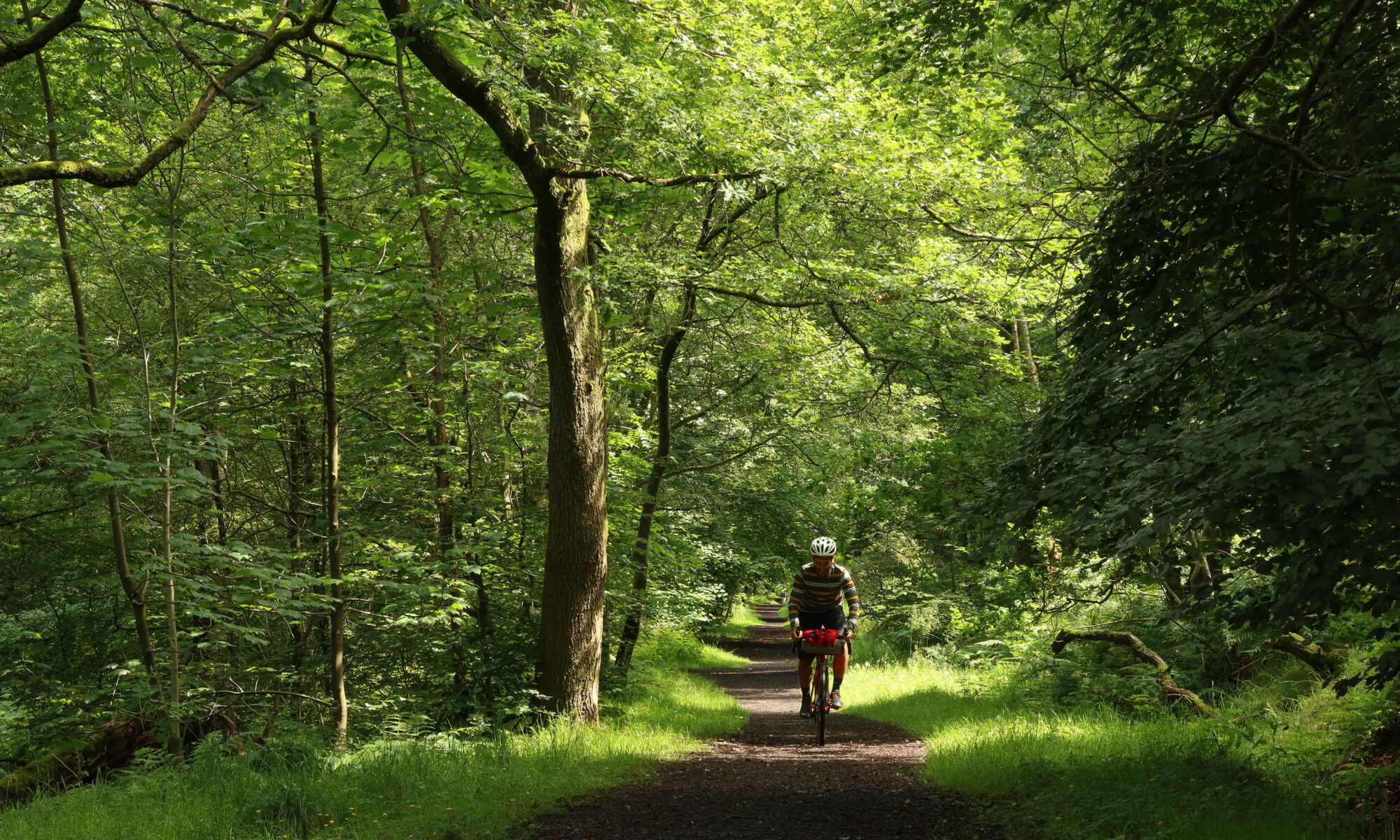 Stunning engineering achievements like the Falkirk Wheel and Avon Aqueduct mingle with historic monuments, big houses, castles and the impressive Forth Bridges on this section of the route, which offers a nice mix of canal towpaths, shore trails and still provides a sense of wilderness cycling through impressive forests.

Download the GPX for Stage 2 for free (as ZIP)

After Auchinstarry Marina the John Muir Way follows the canal towpath to Bonnybridge, where the route crosses underneath the canal on ‘The Radical Pend’. For many years the pend, a passageway for pedestrians and cars under a structure, was the only way to get from High Bonnybridge to “Low” Bonnybridge, until the bridge was built over the canal. If you are brave you can cycle through the water that runs through the pend, otherwise a small path on the side will keep your feet dry. The route joins Bonnyside Road and passes Rough Castle, another Roman fort that is best explored walking. After crossing the railway twice a path leads to Falkirk Wheel, the only rotating boat lift of its kind in the world, and one of two working boat lifts in the United Kingdom. Boat tours of the wheel and the Union Canal offer a change from cycling, and there’s a cafe and visitor centre here for refreshments.

After the Falkirk Wheel a short section through the forest offers a welcome change to the towpath, before the route crosses the Union Canal on gravel tracks into Callendar Wood. This is a popular mountain bike area and offers a network of trails to explore and a good cafe/restaurant. Shortly afterwards the route joins a small road to cross the Union Canal again. Falkirk High Station is well-served by the main Edinburgh to Glasgow railway line, with frequent trains in each direction. From here the route follows roads and paths into Callendar Park, where Callendar House hosts permanent and temporary exhibitions and a tea room. The route through the park passes impressive trees and a pond. Climbing through the park the route meets New Hallglen Road and then follows a path towards the Union Canal, from where the route continues on a well-maintained towpath once again. There are a few cafes along the route before it reaches the Avon Aqueduct. Carried on twelve segmental arches it is the tallest aqueduct in Scotland, and the second longest in Britain, after the Pontcysyllte Aqueduct in Wales.

Shortly after the aqueduct the route leaves the Union Canal and follows the banks of the River Avon into Linlithgow Bridge. Linlithgow, with places to stay and eat as well as frequent train connections to Edinburgh, is only a small detour away. The ruins of Linlithgow Palace are situated in the town. After a section on the road the route follows paths and forest tracks. The Fisherrow walk gives you superb views and was used by wives of fishermen travelling between Bo’ness and Linlithgow to sell their catches. At Kinneil the public park surrounding the house incorporates a section of the Antonine Wall and the only visible example of an Antonine fortlet available today. The route passes the ruins of a small cottage. It was here that the pioneering engineer James Watt devised his improved steam engine in 1765.

After crossing the steam railway tracks the route follows the Bo’ness foreshore towards Blackness Castle. Used in various film sets this is one of Scotland’s most picturesque castles. Built in the 15th century it is open to the public to visit, and the small village of Blackness hosts a great pub and community shop. From here the route follows a well-graded path through the Hopetoun Estate, which passes Hopetoun House. Shortly afterward the route follows the shore road into South Queensferry. The views towards the three bridges over the Firth of Forth are fantastic. South Queensferry offers accommodation, great opportunities for eating out and shops and supermarkets. A train to Edinburgh leaves from Dalmeny station.

The route crosses underneath the Forth Rail Bridge, a UNESCO World Heritage site, and follows the shore on gravel paths and singletrail sections past Snap Point, from where it leaves the shore towards Cramond, and into Scotland’s capital city Edinburgh, which is a welcome overnight stop. Edinburgh offers fantastic opportunities on and off the bike, with a mountain bike heaven in the Pentland Hills south of the capital and other bikepacking routes starting and finishing here, like the Capital Trail and Central Belter. The John Muir Way crosses Corstorphine Hill on singletrails and wider paths, before it winds its way through the town on a mixture of paths along the Water of Leith. After a few steps (with a rail to push bikes up) the route joins the Union Canal towpath for a last time to its terminus at Fountainbridge.