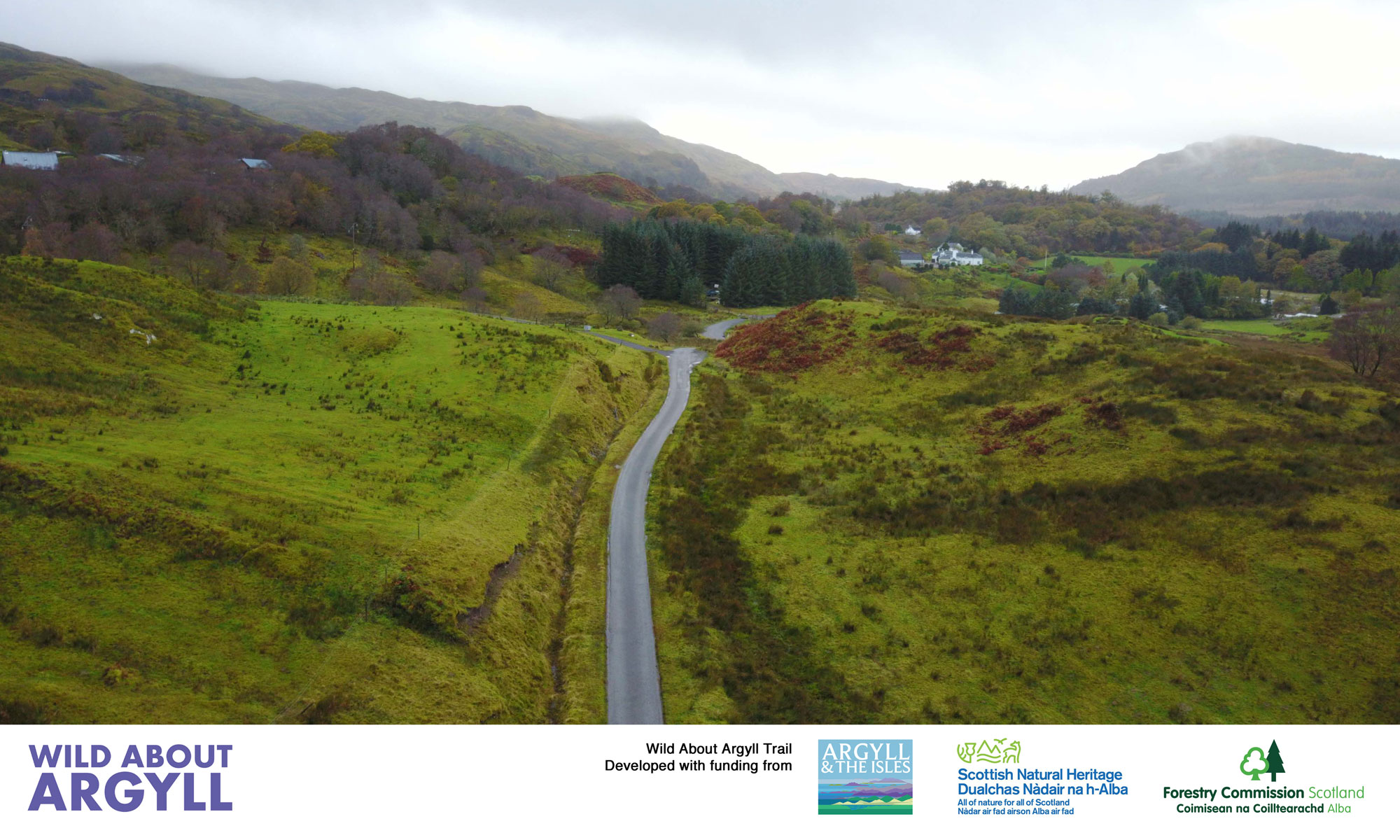 The last part of the Wild About Argyll Trail starts in Port Appin, undoubtedly one of Argyll’s most picturesque spots, overlooking a host of tiny little islands dotted around Loch Linnhe, with Lismore, Morvern and Mull in the background. One of Scotland’s most romantic medieval castles, the much-photographed Castle Stalker, occupies a tiny rock island to the north of the village, a short but worthwhile detour. A quiet road along the shores of Loch Creran, where otters are often spotted, is followed by another short, traffic-free section on the Caledonia Way to Barcaldine and Sutherland’s Grove, from where the route follows the quiet B845 to the shores of Loch Etive.

Cadderlie Bothy, on the north shore of Loch Etive, is another worthwhile detour and overnight spot. ‘Between the burn and the turning sea’, the bothy is featured in Dougie MacLean’s ‘Eternity’. A quiet road follows the shores of Loch Etive to North Connel, where the route joins the Caledonia Way through the picturesque Glen Lonan to Taynuilt. For accommodation and resupplies Oban is just a short detour over the Glencruitten Road. Taynuilt is on the Glasgow-Oban railway line and offers places to eat and stay, including Inverawe Smokehouse, which produces award-winning Scottish smoked salmon and a delicious range of other traditional Scottish foods. From here the route follows the B845 through Glen Nant National Nature Reserve. Amongst its lush Atlantic oak woods, which historically provided the charcoal for the Bonawe Iron Furnace, you can find evidence of ancient settlements and cycle beside a babbling burn to Kilchrenan, with a pub for food and rooms.

Following the Caledonia Way out of the village, the route leaves the cycle route to climb up a forest road to join a track that offers great views across Loch Awe to the east. After a short section along the shores of Loch Avich the route travels back to the valley, passing the impressive Avich Falls, before Dalavich offers a good opportunity to stop. At New York the route joins the old forest track along the shore of Loch Awe to Kilmaha, before re-joining the Caledonia Way to Ford. From Ford the quiet B840 follows the eastern shores of Loch Awe to the start of the Leacainn Forest Drive. This part of the route takes you on a great gravel track through woodland and wild moor to Loch Fyne. For the adventurous, Carron Bothy is about 2 km (1.3 miles) from the forest drive. You can spot a track on your right before the forest road curves to the south at a clearing. On Loch Fyne side the route joins the A83 for a short section before continuing from Furnace along the shores of the loch to a caravan site and, after another short stint on the main road, to Inveraray. With plenty of places to eat and sleep and a picturesque castle, this small, planned town is the ancestral home of the Duke of Argyll.

From here the route follows the A83, with a few smaller sections off the road, passing the well-known Loch Fyne Oyster Bar and Loch Fyne Brewery on the northern shores of the loch. Cairndow, a coastal hamlet on Loch Fyne, marks the start of a trail that follows the east shore of Loch Fyne and then climbs up to re-join the A815 for a short while to Tinker’s Heart.

Climbing on the B830 through Hell’s Glen, the Wild About Argyll Trail takes in one of Scotland’s iconic road climbs, before joining the Ardgartan Peninsula Circuit to the top of the Rest and be Thankful. From the top there are fantastic views across the old valley road, engineered by General Wade during the subjection of Scotland following the Jacobite rebellion. Travelling on a much quieter gravel track away from the busy A83, the route joins a small path from the Ardgartan car park to the shores of Loch Long, and then travels alongside the A83 to Arrochar.

From here the route follows an undulating trail through the forest, and after a short section on the Three Lochs Way joins the road at Arrochar and Tarbet railway station to the shores of Loch Lomond. The West Loch Lomond Cycle Way marks one of the last sections of the Wild About Argyll Trail, an easy journey with spectacular views of Loch Lomond and its famous islands, Conic Hill and the most southerly Munro Ben Lomond. The pretty, planned village of Luss is well worth exploring and offers the opportunity for catching a well earned refreshment. At Arden Roundabout the route follows the A818 and then the cycle path back into Helensburgh, where the trail finishes at the pier.