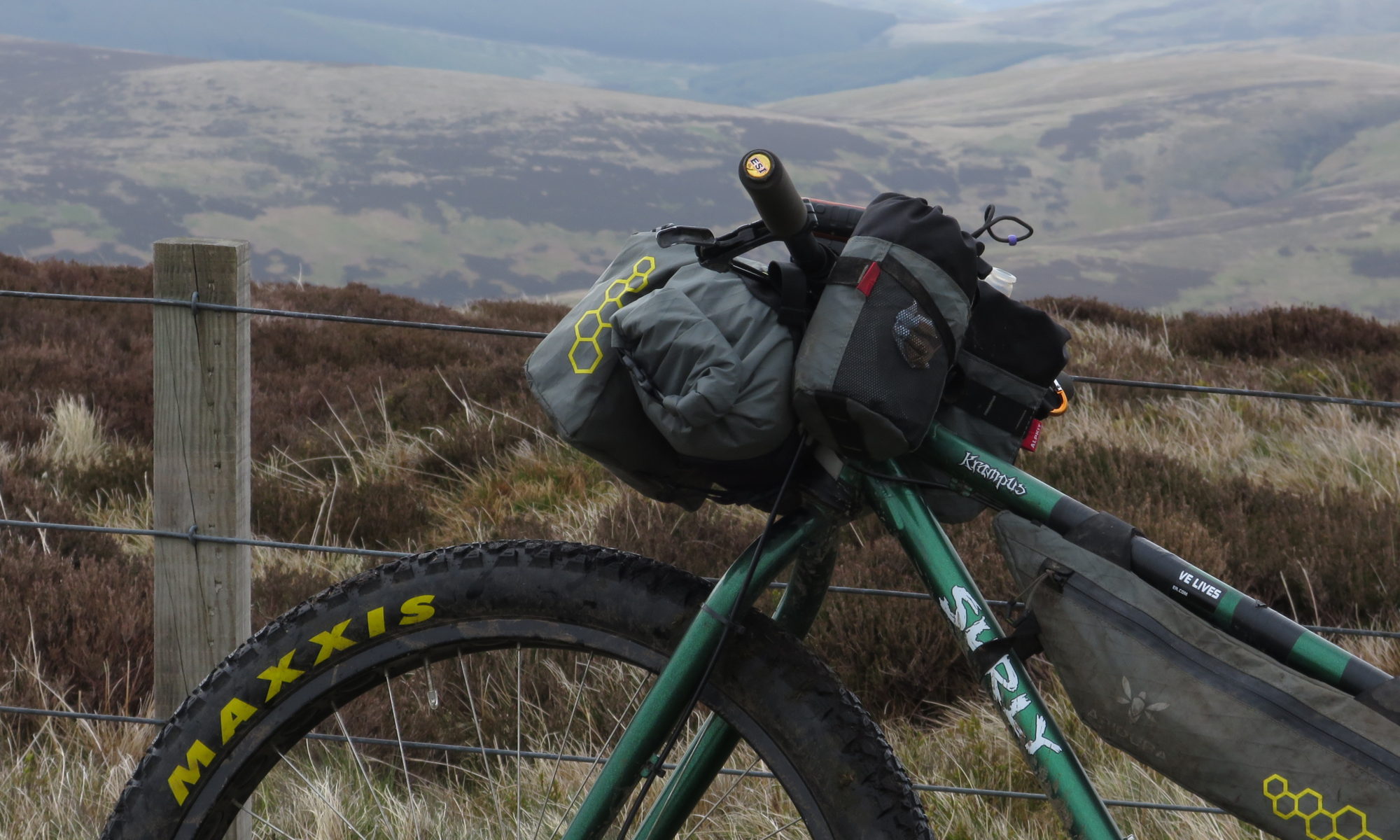 So what is bikepacking? Let us tell you more.

Andy and Alan. Two names that will forever stick in my head. I met Andy at a cross race near Edinburgh in October 2013, both of us covered in mud from head to toe, waiting for a warm brew in the queue. What got us talking was that we both hauled singlespeed bikes along the course, and each of us was looking for someone likeminded to go out for a couple of training rides in winter. As we kept talking, Andy mentioned a guy called Alan Goldsmith, and the Highland Trail 550.

I cycled home after our conversation and searched for the Highland Trail 550 online. What I read sounded tough, but right up my street. “The Highland Trail is a long-distance self-supported mountain bike time trial route through the Scottish Highlands. There is no entry fee, no prize money, and definitely no support. It is a self-timed individual time trial. All that is provided is inspiration, a suggested start time, a GPS track file, and a list of completion times.”

Straight away I remembered my first long distance cycling experience in Scotland. In 2006, with a good friend from Germany, I spent almost three weeks in the Highlands, hauling heavy 13kg backpacks around, each losing almost one clothing size in the process. We mostly camped, took off-road paths wherever we could, and had the time of our lives.

I emailed Alan straight away and asked him to put me on the list for the Highland Trail. “Hi Alan, I just read about the Highland Trail. I would be keen to enter for next year. Are you the right person to do that?” Alan got straight back: “Hi Markus, yes I’m the right person. You have a place. I hope you know how hard this ride is!” My bikepacking career had just begun.

I finished in 2014 and did so again in 2015. I caught up with Alan again after the 2015 race, this time in person. He told me that there are only three people who have completed the Highland Trail at least twice: him, me and Tom Rowntree, a friend from Edinburgh who won in 2015 and came third in 2014.

The Highland Trail is the jewel in the crown of bikepacking events in Scotland and the UK. Outside the United States, the spiritual home of bikepacking, the UK has one of the fastest growing bikepacking scenes in the world, according to Neil Beltchenko, founder and editor of Bikepacker.

As Scotland has some of the best access laws in the world it comes as no surprise that people from across the globe come here to take part in events or simply spend their holidays discovering the many old drovers’ and military roads, mountain passes, walking tracks and tiny country roads on their bikes. The Highland Trail has attracted riders from Spain, the United States, Italy, New Zealand, the Netherlands, Belgium – the list goes on.

But what exactly is bikepacking? Well, think backpacking, but with a bike. The great thing about bikes is that they take you virtually any place in the world, and they take you there in a much shorter time than your feet will. So is there an exact definition for bikepacking? I try to find out. Salsa Cycles, who have just released the first Bikepacker’s Guide, describe it as “a new golden era of cyclists looking to experience more in the backcountry via their bicycles”.

When searching further for definitions for bikepacking, I’m amused by the one found in the Urban Dictionary: “Similar to the term ‘backpacking’, the term ‘bikepacking’ is the sport or activity of exploring new places on your road bike while carrying a backpack. Not to be confused with the word ‘touring’, which many associate with old people leisurely tooling around with panniers and helmet mirrors at painstakingly slow paces.”

A backpack, on a road bike? Although I loved my first trip in Scotland, I could neither sit or walk after the first three days. Carrying a heavy backpack on the saddle makes rides a miserable experience above anything else. While I wouldn’t agree with the definition at all, there is one truth in there: bikepacking is about exploring new places without being constrained by your bike.

Well, not bikepacking as we know it now. If you’ve ever had your panniers fall off repeatedly as you descend a mountain pass, you will know how painful going off-road was in the old days, before bags that directly attach to the bike were invented. Rough tracks were torture, not fun.

In my search for definitions I carry on to Bear Bones, which describes itself as “The Bikepacking Website – for all bikepacking enthusiasts, whether you’re a hardened adventurer, ultra racer or just a two-wheeled tramp!” It’s a brilliant resource for all things bikepacking, but not the place to find a definition. I begin to conclude that the term bikepacking is just another fashionable word, invented by a few marketing people in order to sell their goods to an ever-increasing audience of thrill seekers needing to escape the cruel reality of everyday life. “Bikepacking is running away from home for grown-ups’ – maybe the writer Hilary Oliver has nailed the definition as well as anyone.

To my eyes, bikepacking is a form of exploring the backcountry on your bike, fully self-sufficient. That can be on roads or anything you find to ride your bike on. The best way to do that is using ultra-light bags that attach directly to frame, fork, handlebars and seat post, taking food and equipment to spend one or many nights outside.

Using the space within the main frame as well as other key positions around the bike, those bags provide more versatility than traditional panniers. Weight can to be distributed more strategically on the bike to preserve predictable handling characteristics, maximising the ride quality and your enjoyment, especially off-road. While the bags themselves are lighter already, you also save weight by having no racks. Modern carbon frames don’t come with rack mounts any longer, so bags are the ultimate solution.

To invent those bags it took people like Jeff Boatman at Carousel Design Works, who introduced the concept of ultralight bicycle touring in 2006 to reduce weight and eliminate mechanical complexity, after spending more than a decade developing gear for his personal use. Others followed, such as Eric Parsons of Epic Designs (now Relevate). Based in Alaska, he began sewing frame bags for fat-tire snow bike races in 2007. Demand grew quickly and after a few months he left his engineering job and devoted himself to designing and sewing bags for others who needed functional, lightweight gear to adventure on two wheels. Tori Fahey, who started bikepacking on the Tour Divide in 2011, after returning from cycling Egypt to South Africa, went on to sell her ultra-lightweight frame, saddle and handlebar bags under the brand Apidura. And there’s people like Michael Cleveland from Spokwerks, who manufactures every bag to the client needs from his flat in Switzerland, and Wildcat Gear, a company based in the Brecon Beacons in Wales, which produces custom solutions for bikepacking, hand made in the UK.

Wildcat’s slogan “ride far, ride free” nicely expresses the possibilities bikepacking opens up. There are no rules when it comes to the bike, but bikepacking can possibly be linked with the recent renaissance of rigid bikes. While the ultralight bags will attach to almost every frame, a full suspension bike doesn’t give as many possibilities as a rigid hardtail does. My choice for my round the world trip is the Surly Ogre, a rigid frame sporting 29’’ wheels and all the mountings you can think of. A perfect bikepacking rig.

So what is a typical bikepacking set-up? First of all, you can mix and match as you like, but make sure to distribute the weight properly in the bike. Store heavy items as close as possible to the frame. I am able to attach two cages to the fork, packed with 4-litre waterproof bags. The cages can hold anything you can strap on to them, from water bottles to gas containers for your stove. The handlebars will hold a rolled bag with up to 20-litre capacity, expandable to 25 litres with an optional accessory pocket. The handlebar bag is designed to make use of the space below, eliminating the need for a front rack. Next to the stem are two stem bags, large enough to hold a Nalgene bottle, multiple energy bars or gels, camera and much more. Frame bags come either as full frame bags, which cover the whole triangle and have enough space for all items you need to access on the day and food, or in smaller sizes, allowing you to still use one bottle cage. On the top tube there is space for more bags, designed to add easy-access storage space for frequently used items. The rear of your bike provides another great opportunity to attach a bag, designed to make full use of the space under the saddle, eliminating the need for a rear rack, holding up to 17.5 litres. Alternatively you can get harnesses for handlebars and seat post which hold dry bags, or use straps to create your own solution.

Possibly the most important advice for bikepacking is to only carry the essentials you need, so pack light and think twice. A dynamo hub on the front will enable you to charge electronic devices during the day, and power your lights for longer rides. When your adventures take you beyond mobile phone reception, often the case in Scotland, a satellite tracker like the SPOT Gen3 lets family and friends know you’re OK or sends emergency responders your GPS location, all at the push of a button. Add this rugged, pocket-sized device to your essential gear and stay connected wherever you roam.

GPS units have also contributed to the rapid rise of bikepacking. Navigation is no longer a real challenge if you use one, and tools like OS Maps make it easy to plan your trip in the backcountry in the comfort of your living room. Even with a GPS unit you should be prepared for its failure and carry a paper version or maps of the region you are going to. Units like the Garmin eTrex20 run on conventional AA batteries, making it much easier to get fresh batteries in remote parts of the Highlands.

If looking for a route, you might like to try the Capital Trail, which I designed earlier this year. At 149 miles it’s a great introduction to bikepacking and is designed to be ridden in two days. The route offers a real challenge, with 6000m of climbing and an amazing variety of singletracks, Land Rover tracks, forest roads and quiet country lanes. For the more experienced, the Cairngorms Loop, a 186-mile route through the Cairngorms National Park, is the next step up. Based on the classic Tour of the Cairngorms mountain bike route, the course uses different trails to loop twice around the central Cairngorm Mountains, starting and ending in Blair Atholl. The ultimate route is the 560-mile Highland Trail, featuring great trails, beautiful scenery and remote wilderness. It starts and ends in Tyndrum.

So what if you like experiencing all of those romantic remote places, but can’t be bothered to spend day and night outside in the fickle Scottish weather, where ice and snow are likely, even in summer? Simply make use of the great network of bothies, basic shelters that can be found on most of the routes. And if you are after more comfort, there is a great network of hostels across Scotland, that make a welcome change to your tent, and possibly you will bump into another bikepacker. Go out there, and enjoy the possibilities that bikepacking offers.